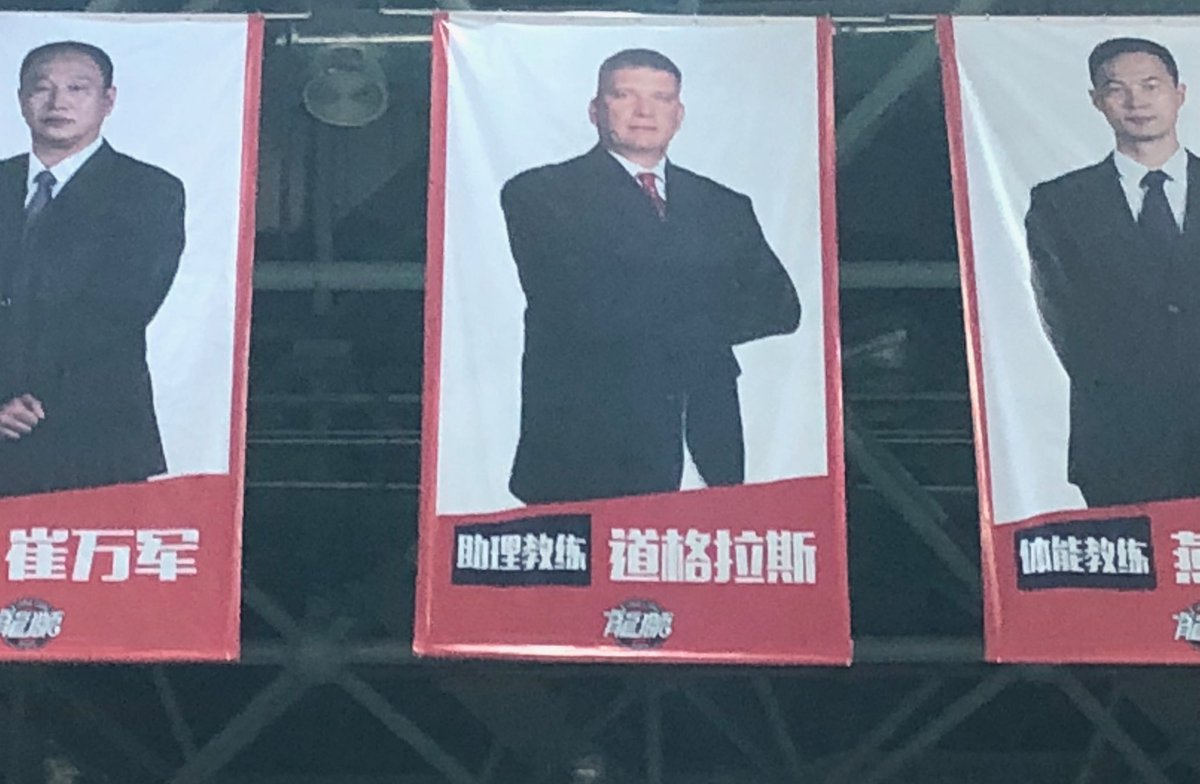 University of Maine – Orono, ME

University of Maine – Orono, ME

Douglas Leichner has been a successful head coach for eleven seasons with a proven track record at six different levels of basketball, while guiding six programs from hardship to prosperity. He has garnered “Coach of the Year” accolades on ten occasions and has won six championships. Leichner’s record the last five seasons, as a head coach, is (55-19-1) .743 winning percentage with an overall record of (170-101-1) .625 winning percentage.

In October 2017, Leichner was an October addition to the Guangzhou Long Lions franchise, a member of the CBA located in Guangzhou, China. He quickly adapted and integrated himself into the program and spearheaded the change in the team’s culture, which ultimately lead to the Long Lions playoff debut and winningest season in franchise history. Among Leichner’s many responsibilities, he played a pivotal role in both the offensive and defensive schemes throughout the season. As a trusted assistant, one of the major duties was to manage the import players on and off the court.

In September 2016, Leichner was appointed head coach for the Orlando Waves professional team in their inaugural season in the historic ABA league. The Waves have taken the ABA by surprise and were ranked #1 in the nation. Leichner’s high octane offense is a fan’s favorite as the Waves are leaders in many offensive statistical categories.

In October 2015, Leichner founded Leichner Basketball Academy (LBA) based in Orlando, FL. He conducts individual and small group basketball training sessions for elite athletes looking to get to the next level. Leichner has been fortunate to work with NBA, Euroleague, international, collegiate and high school level players. All programs are customized to address the areas needed for improvement. Workouts focus on a variety of areas such as offensive and defensive basketball techniques, shooting fundamentals, dribbling skills and agility drills.

(26-9, 17-3), won the MAAC Regular Season Championship and participated in the NIT. Known for “Postology” techniques and instruction, this season was no different as center David Laury was named MAAC Player of the Year.

In April 2013, Leichner was named Great Britain U20 National Team Head Coach. This prestigious appointment solidifies him as a key figure in the global basketball market. Leichner made an immediate impact as he led Great Britain

to an unprecedented championship appearance and an unprecedented promotion to U20 Division A European Championships. The team was 16-1 under his tenure including an undefeated preparation phase (9-0). GB went undefeated in pool play including a victory over the eventual champion Poland. Leichner designed an exciting up- tempo style of play that paid immediate dividends as GB led the tournament in several categories including: scoring 83 ppg, 3pt

FG 36.4%, 3pt FGM 9.9pg, Free Throw Made 14.6pg, Free Throw 72.7% and fewest TO’s 12.1pg. At the 2014 U20A European Championships, the team exceeded expectations with wins over Latvia, Slovenia and host country Greece achieving the 2nd highest finish ever of any GB team regardless of age or gender in Division A.

In 2012-2013 season, Leichner completed his fourth season as Associate Head Basketball Coach for the University of Maine Black Bears. He has made an impact as the defensive architect behind Maine’s success. Under Leichner’s direction, the Black Bears have become perennially ranked in many defensive categories and known for their aggressive and innovative defensive schemes. The Black Bears led the America East Conference in blocks (4.0 per game) for the second time in three seasons. In addition, Maine’s 2009-2010 team had the second most regular season wins in program history (19) as well as the fourth-most overall wins in the program’s history. The Black Bears also

ranked among the nation’s leaders in field goal percentage defense (19th), scoring defense (39th) and fewest personal fouls per game (16th). A vast improvement from the previous season where the Black Bears were last in the league in scoring defense and second to last in defensive field goal percentage. Leichner has produced four America East All- Defensive Team selections in his past six seasons at Maine.

A tireless recruiter, Leichner successfully signed Alasdair Fraser (Scotland) and Noam Laish (Israel) the 32nd ranked and 47th ranked prospects in Europe respectively, Till Gloger the MVP of the German U19 League as well as Justin Edwards the #8 ranked player in Canada. Justin Edwards was an impact player as he earned America East All-Rookie Team. In 2012-2013, Justin Edwards led the America East in scoring (16.7ppg) and steals (1.9spg) en route to being named AllAmerica East Second Team.

500 rebounds and 100 blocks in a career. Alasdair Fraser was named to All-America East Second Team and Mike Allison was named to America East All-Defensive Team. Under Leichner’s direction, five players have garnered All Conference honors, including Troy Barnies who was a first team selection in 2010-2011.

The 2008-2009 season proved to be an unprecedented campaign as head coach of the professional club, UCC Demons in Cork, Ireland. The Demons finished 22-1-1 and captured the elusive “Treble” for the first time in Irish basketball history. They were the SuperLeague Southern Conference Champions, the 2009 Irish National Cup Champions as well as the SuperLeague Champions.

Leichner has coached numerous players in his career who have played in either the NBA or in Europe. With the UCC Demons, Leichner recruited and developed two major impact players to the SuperLeague: Jerrah Young was named “Import Player of the Year” and Colin O’Reilly was named “SuperLeague MVP”. Leichner’s responsibilities did not end with coaching.

He was also responsible for development of the club’s feeder programs and overseeing all the coaches within the club. Leichner also organized clinics, marketed the organization, and was director of the Demons basketball camps.

Leichner came to the UCC Demons after spending four seasons as an assistant at the University of Maine, a NCAA Division I program in the USA. He was the lead international recruiter and assisted in developing many of the Black Bears offensive and defensive schemes.

Leichner came to Maine after spending seven seasons as a high school head coach in Florida. He had stops at Osceola High School in Kissimmee, Merritt Island High School and Episcopal H.S. in Jacksonville.

advancing to the Elite Eight. He also served as an assistant coach during the 1996-97 season at NCAA Division II Stonehill.

A 1992 graduate of Central Connecticut State University, Leichner was a four-year letterman, three-year starter and served as captain as a senior. He returned to his alma mater as an administrative assistant for the 1993-94 season and was promoted to assistant coach where he served through the 1995-96 season.

An avid traveler, Leichner is conversational in German and Spanish as well as an active member of the National Association of Basketball Coaches (NABC) in addition to having a certified FIBA coaching license.

2nd highest finish ever of any GB team regardless of age or gender in Division A European Championships Wins over Latvia, Slovenia and host country Greece

Article regarding my positive impact with club.

Interview Regarding Preparation for European Championships

Thought of the Day: Inspirational Quote

“It is amazing how much can be accomplished if no one cares who gets the credit.” John Wooden

Know your role: Do your job!

No Layups No 2nd shots

Stop ball! Steer to a side to establish defensive principles 1st Big Back protect rim

No catch and shoot – High Hands

No direct drives Load to ball

Keep it on a side – Deny reversals On baseline drive, we’ll trap outside paint Individual Defensive accountability

Bluff and stay from ball side, help from help side

Sprint the lane! 3 to the glass – 2 players sprint back!

Understand what is a bad, good and great shot Know time and score situation

Quote: “It’s what you learn after you know it all that counts.” John Wooden

Emphasis of Practice: Mastery of the plays!

Shoot and follow, say name and pass to open man, then spot up – shot ready!

Zone A. Line B. Louisville

Bluff and Stay from ball side, Help from help side Sprint to help/No face cuts/

Floppy A. Floppy B. Floppy L Motion A. Motion B. Motion 5

Things to work on

Things to work on